The Indian textile & clothing industry has been facing severe challenges in the aftermath of demonetization, GST implementation, global economic slowdown, US-China trade war and recently, the Coronavirus outbreak in China. Though, there has been a steady growth in the domestic market, the exports have got stagnated, rather there is 4% negative growth during the last four years. China has not only cut down its production of textile products but has also started outsourcing thus created a huge space in the international market. This opportunity has been fully exploited by small countries like Bangladesh, Vietnam, etc., and has pushed back India into the 5th position in the global textile trade from the 2nd position that it had been retaining for several years.

The global textile market of cotton and man-made fibre is in the ratio of 30:70 while it is reverse in India. In the total Indian textile exports, cotton textiles accounts for 80% due to the price advantage of the home-grown cotton, while it is only 20% in the manmade fibre segment due to expensive raw material price. The indigenous man-made fibres especially polyester fibre, the future engine of growth have been expensive due to the anti-dumping duty levied on basic raw materials especially Purified Terephthalic Acid (PTA). In the recent Union Budget announcement, the Government took a bold step and abolished anti-dumping duty on PTA thus, creating a level playing field for the MMF Sector. PTA accounts for 70% of the raw material to produce the polyester fibre. Anti-dumping duty on PTA varies from US$ 27 to US$160 per metric tonne.

Mr. T. Rajkumar, Chairman, CITI stated that around 200 industrialists representing the entire textile value chain from Southern India and the members of the National Committee for Textiles & Clothing (NCTC) attended the above interactive meeting. Mr. Rajkumar thanked the Hon’ble Prime Minister of India, Hon’ble Union Minister for Textiles and the Secretary (Textiles) for the bold decision of removing anti-dumping duty levied on PTA. He said that this initiative has enabled the indigenous fibre and filament manufacturers to reduce the price considerably. Mr. Rajkumar also stated that the country has been suffering with surplus production capacities across the value chain created during the last four years with huge investments that could be utilized for polyester textile manufacturers.

The Secretary (Textiles) in his address strongly advised the textile industry of Tamil Nadu to grab the opportunities by diversifying into polyester segment to boost exports. He appreciated the sustainable initiatives taken by the Tirupur and Coimbatore by implementing zero liquid discharge to protect the environment, predominantly using non-conventional energy to avoid carbon foot print, apart from complying with various labour and other social statutes. He advised Tirupur Knitwear Cluster to brand its garments and products under sustainable programme that might fetch them larger margin globally and the Government would extend all necessary support to promote the brand.

The Secretary (Textiles) also indicated that the Government would address all the structural issues in its new National Textile Policy that might be announced in a couple of months by making the basic raw materials available at international price, encourage scale of operation by developing 10 mega textile parks with over 1000 acres of land closer to the ports, giving plug and play facilities including the necessary safeguard measures in the labour laws. The Secretary (Textiles) also indicated addressing the power cost, credit cost and its availability. The government would also make efforts to expedite conclusion of FTAs with EU, UK and Bangladesh along with other countries to boost the exports.

Mr. T. Rajkumar stated that the Government has identified the textile industry as the thrust area and in real terms encourages “Make in India” initiative as without any imports right from fibre to finished goods, ensures inclusive growth by providing jobs to all skill levels especially the rural masses and women folks. Mr. Rajkumar observed that the Government would also announce a Scheme to set up dedicated textile parks for technical textiles, textile machinery manufacturing with the state-of-the-art technology spares, accessories, parts to promote import substitution thereby reducing the capital cost substantially as India is currently depending on imported technology barring spinning sector. He has said that the Government is also exploring the possibilities of setting up R & D centres with the State-of-the-art facilities for each segment of the textile industry. 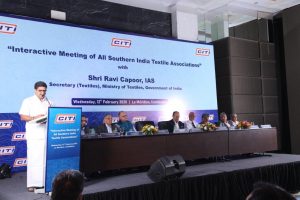 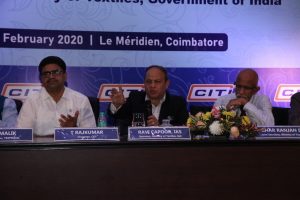 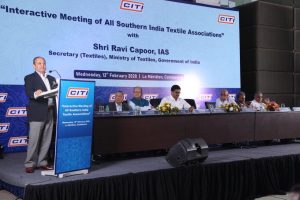 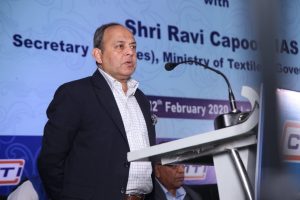