New Delhi, Tuesday, 04 January 2022: The predominantly cotton based Indian textile industry revived on a fast track after the second wave of COVID pandemic taking advantage of the various relief measures, various pro-active policy initiatives taken by the Government and spurt in demand both from the domestic and international market. But unfortunately, the skyrocketing cotton price has stalled the potential growth of the textile value chain and is causing uncertainties under the current market scenario. The Cotton price that prevailed at Rs.37,000/- per candy of 355 kgs during September 2020, increased to Rs.60,000/- during October 2021. During November 2021, the price varied between Rs.64,500/- and Rs.67,000/-. The cotton price reached its peak level of Rs.70,000/- per candy on 31st December 2021.

The price of Gujarat Sankar-6 cotton is now ruling at Rs.10,062/- per quintal as against the Minimum Support Price (MSP) of Rs 5,975/- per quintal. During the last two cotton seasons, the Cotton Corporation of India (CCI) had procured around two crore bales under Minimum Support Price. As the kapas price is ruling much higher than the MSP during the current season, CCI was not able to procure any cotton in this season. The Indian cotton price has been fluctuating in tantamount with the international cotton price (New York Index and Cotlook A Index) till February 2021. Consequent to the levy of 5% BCD, 5% AIDC and 10% Social Welfare Cess on both amounting to 11% import duty on cotton in the Union Budget 2021-22, the Indian cotton price started ruling higher than the international price for the first time, making the exports uncompetitive resulting in hardships for the exporters in fulfilling the export commitments and taking further orders.

In a Press Release issued here today, Mr. T.Rajkumar, Chairman, Confederation of Indian Textile Industry (CITI), has appealed to the Hon’ble Prime Minister to remove the import duty levied on Cotton immediately and help the highly labour and export intensive textile industry to gain global competitiveness and prevent the industry from crisis. Mr. Rajkumar reiterated the continuous plea made by the textile industry since February 2021 on removing the import duty on cotton, as the same had never affected the farmers as the industry had been predominantly importing speciality cotton including Extra Long Staple cotton, contamination-free cotton and sustainable cotton as the same are not produced in our country to fulfil the requirements of the nominated business customers on a long-term basis.

As the kapas price is ruling highest in history, the farmers are not bringing the cotton to the market resulting in short supply and surge in kapas price. Mr. Rajkumar has stated that though the price increase is greatly benefitting the cotton farmers, the industry is not able to pass on the hike to the end customers as the domestic cotton price has exceeded the international price. CITI Chairman said that the highly capital-intensive spinning sector, though had been retaining the same yarn price for some time hoping for a reduction in cotton prices during peak arrival season, had to increase the yarn price gradually, as the good quality cotton has surpassed Rs.73,000/- per candy of 355 kgs. Mr Rajkumar has stated that the spinning mills would have normally built three to four months of cotton stock by the end of December, but the steep increase in price has made the mills maintain less than one month of inventory.

CITI Chairman has stated that the increased rainfall during cotton plucking time has seriously affected the cotton quality causing an acute shortage of good quality cotton for the Indian exporters. He has said that the Rd value, the cotton brightness indicator is around 65 as against over 70 during the earlier seasons. Mr. Rajkumar has stated that cotton arrival during December, January normally would be 2.3 to 2.5 lakh bales per day and the same is ranging only from 1.62 to 1.8 lakhs per day during the current season. CITI Chairman has pointed out that only around 121 lakhs bales had arrived in the market as on 31st December 2021 as against 170 to 200 lakhs bales that normally arrive in the market during the earlier seasons. Mr. Rajkumar has stated that the arrival of 121 lakhs bales indicates a short supply of cotton for building good quality cotton inventory to meet the export quality requirements as the consumption for three months would be around 85 lakhs bales with around 10 lakh bales for export, around 15 lakhs bales for the work-in-progress of the agriculture market, ginning and transport resulting in lower cotton stock level in all the mills. He has stated that as the farmers are holding the cotton, the mills have started facing a shortage of good quality cotton. Therefore, CITI Chairman has pleaded with the Hon’ble Prime Minister to remove the import duty levied on cotton as the domestic cotton price has exceeded the international price and the kapas price is ruling around 65% higher than the minimum support price. 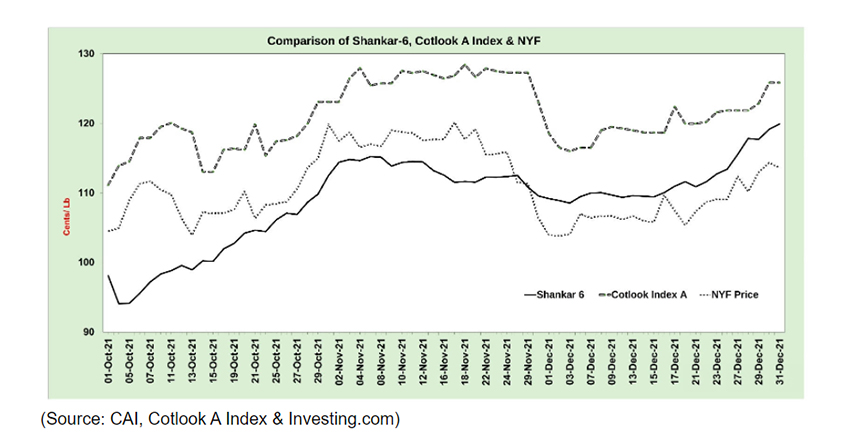